Search
Menu
Search
Heat guns and hair dryers are two very handy heat applying equipments that have versatile uses and applications. Let us show you the differences between these two in order for you to know which one to use depending on the situation. 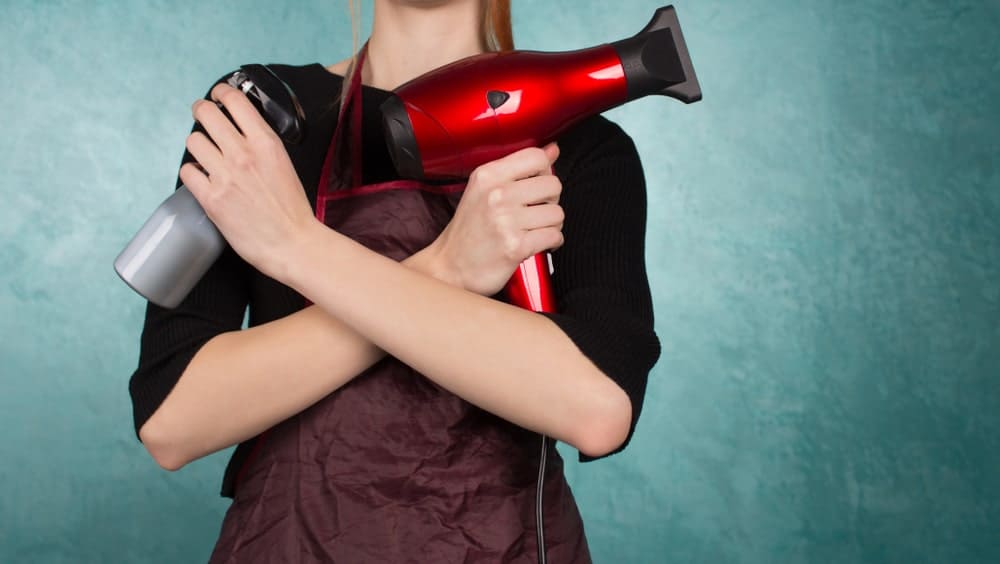 If you’re in the market for a gun-shaped object that projects hot air at varying intensities, you might be considering both a hairdryer and a heat gun. While they look similar and do effectively the same basic thing, they are magnitudes different and are better and worse at certain tasks.

Both machines operate by blowing air over a coiled heating element, and both are handheld and convenient tools for the tasks for which they were designed. A heat gun, however, is not a tool for hairdressing any more than a small dragon would be, and a hairdryer won’t work for jobs designed for a heat gun. To that end, we’re going to examine the differences between the two, when one works better than the other and when they can be used reasonably interchangeably.

What is a heat gun? 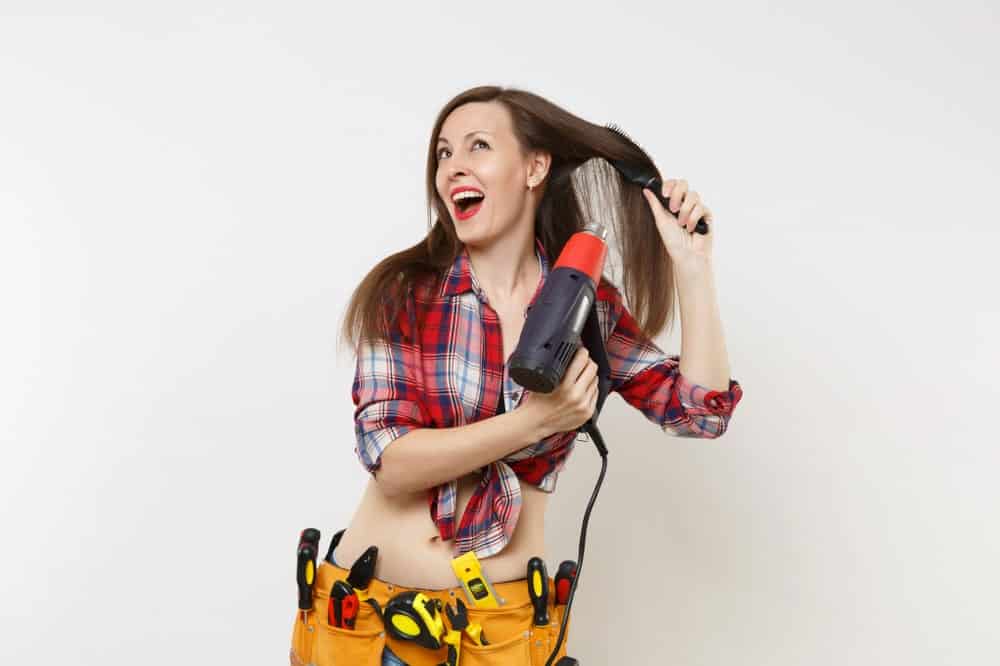 Conceptually, a heat gun is like a hairdryer, save for two major differences:

Heat guns have been used by tradesmen for at least the last 40 years, and probably longer in some incarnation before that.

What is a heat gun used for? 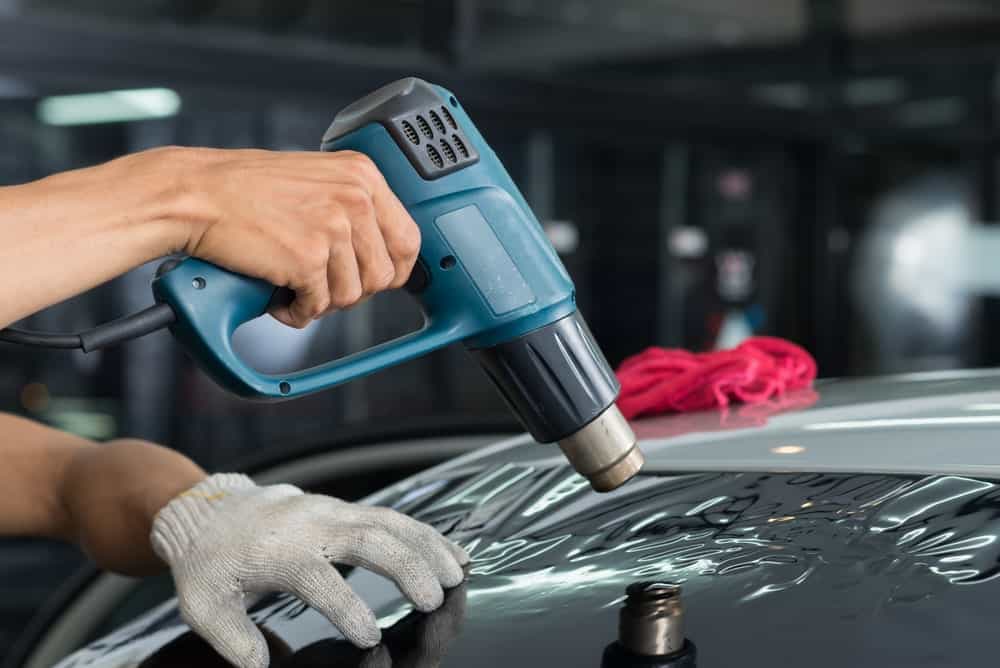 Since the above specifications are not useful cosmetically, let’s examine what a heat gun is used for:

How do you use a heat gun? 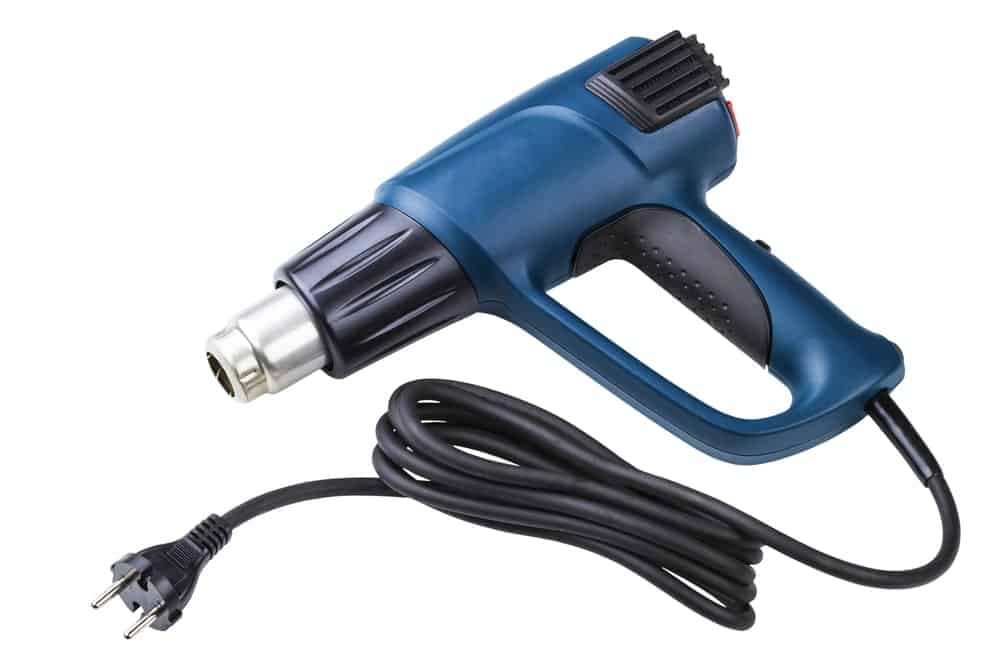 Just like a hairdryer, it’s pretty much just point and shoot. Most heat guns simply turn on when you plug them in, though professional-grade models will have adjustable settings and on/off triggers, as they can get much hotter than commercial-grade models.

Typically, you want to start out at least a foot away from whatever you’re heating up, as the beam of heat is much more focused and can very rapidly destroy or damage whatever you’re working on. You’ll learn optimum distance as you get more comfortable with the device. 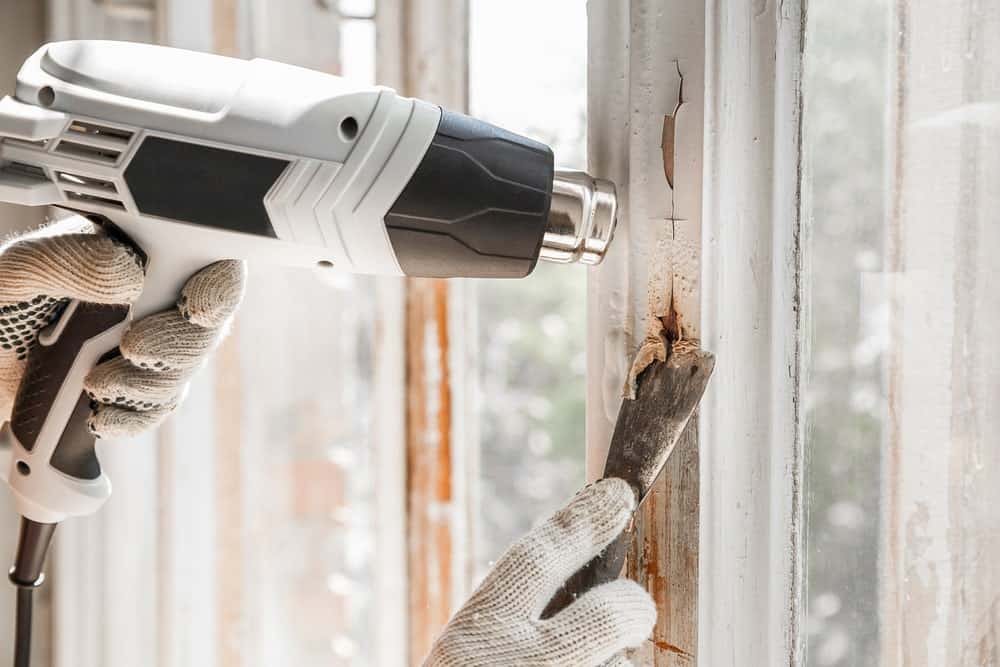 As with any product, there will be key differences depending on how much you spend and how experienced you are. We use a simple heat gun for crafting and sealing up window coverings and it doesn’t have any temperature gauge, buttons, or dials; it simply heats up to 300 degrees Fahrenheit (148.89 °C) and we aim it where it needs to go. If you’re into precision, a digital heat gun is much more your style, with a readout that shows you very clearly what temperature your device is currently at. 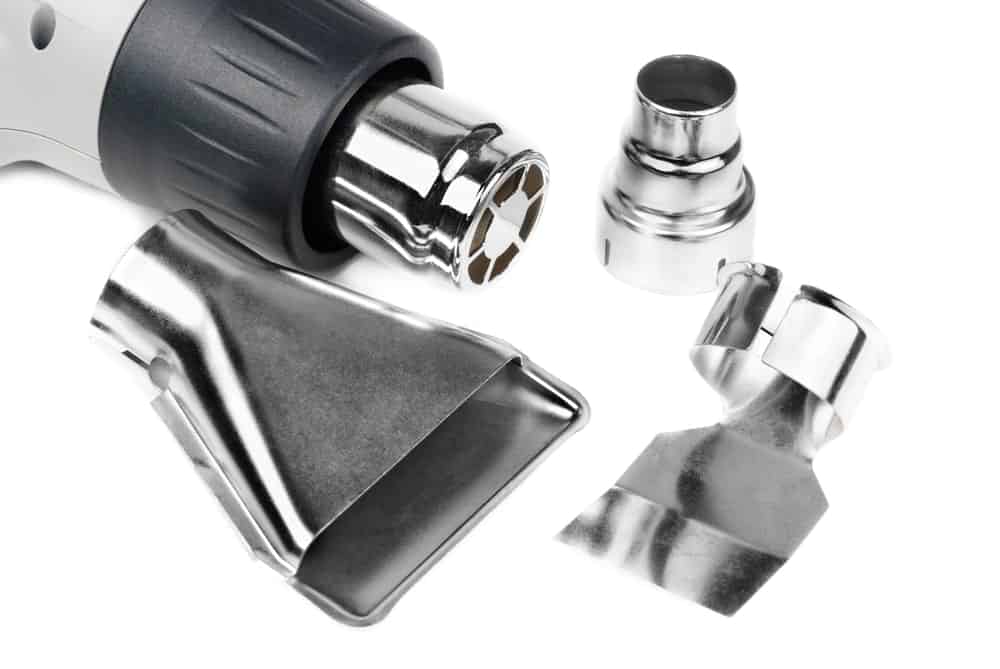 Additionally, the nozzle shape is important. Using one with a much smaller diameter will make a very hot stream of air that blows out very quickly and will require you to stand further back from your target.

A wider nozzle will obviously affect a larger area with less intensity and different shapes have different uses as well. A wide-mouthed model might be perfect for removing tricky wallpaper but bad at heating plastic, for instance.

What is a hairdryer? 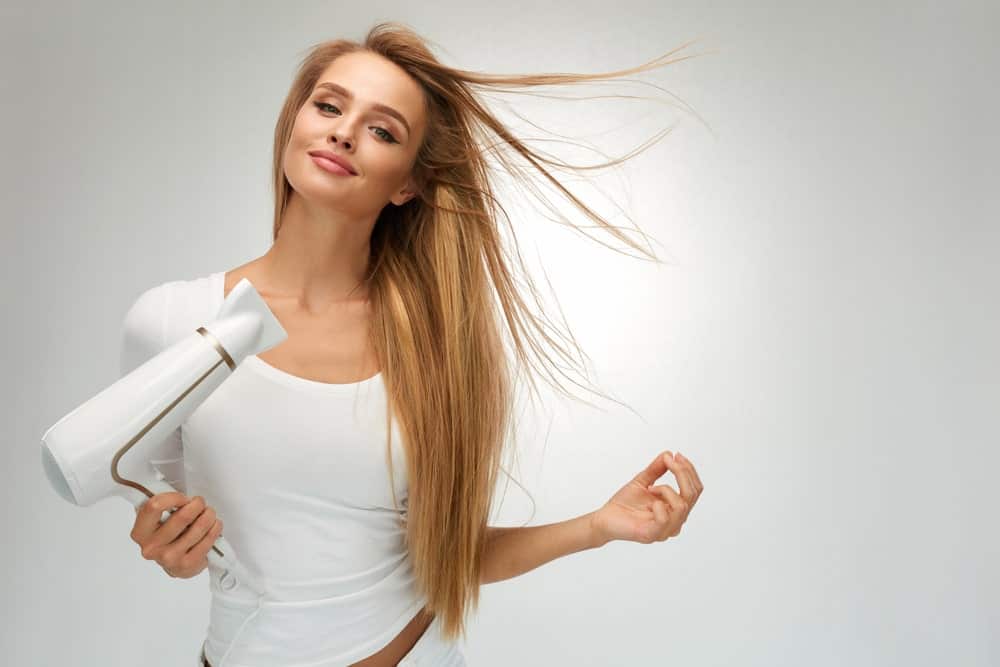 I think most of us have experienced a hairdryer before, but you might not have ever considered a hairdryer on a philosophical level. We’re not going to really do that, either, but we can look at some specifics of what makes up a hairdryer: 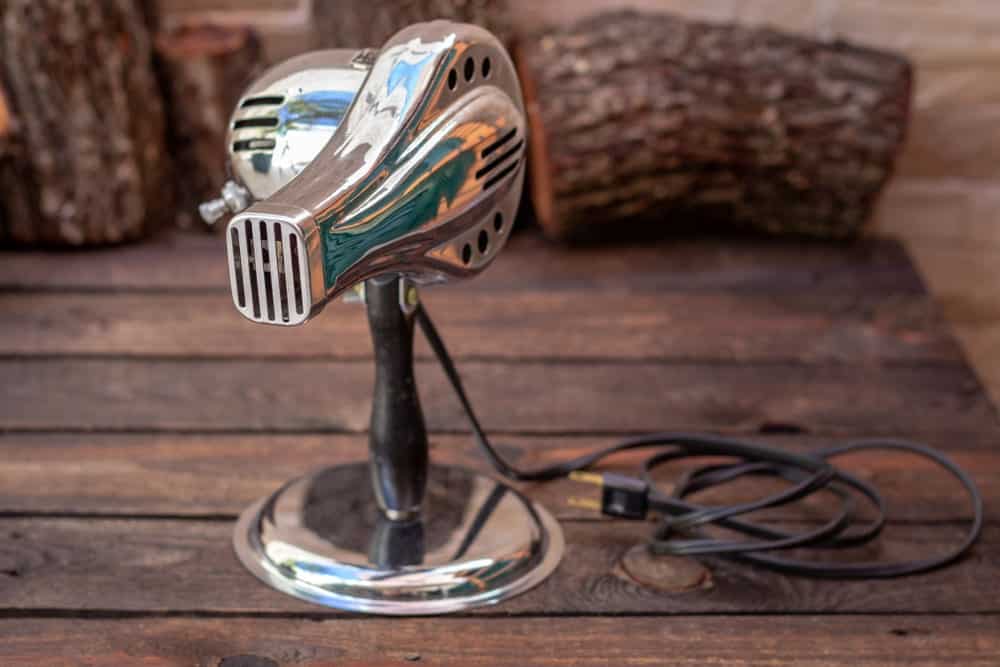 Fun fact: hairdryers were first invented in 1890 by a French hairstylist, because of course, they were. Alexander Godefroy basically ran a pipe from a stove to a seat but honestly, we applaud him for his inventiveness. Handheld dryers came about 30 years later, in the 1920s, and haven’t changed tremendously since.

How do you use a hairdryer? 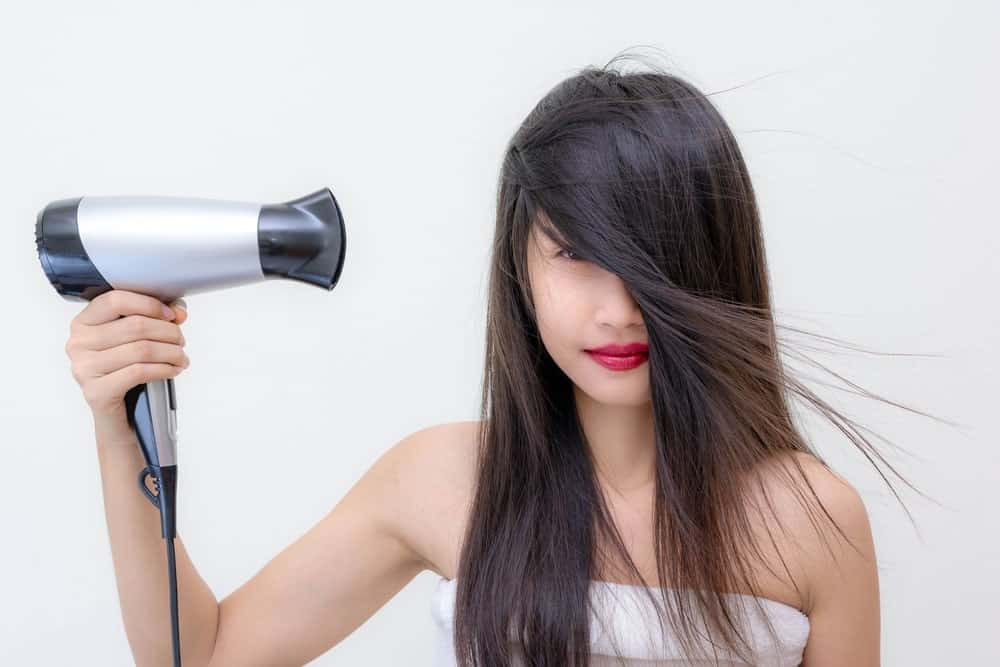 Though there are differences in models, the primary usage is to take sections of your hair and dry them while brushing or otherwise styling. You can achieve many different styles using a hairdryer, and a dryer is less damaging to your hair than using a towel that can break hair and damage tips. 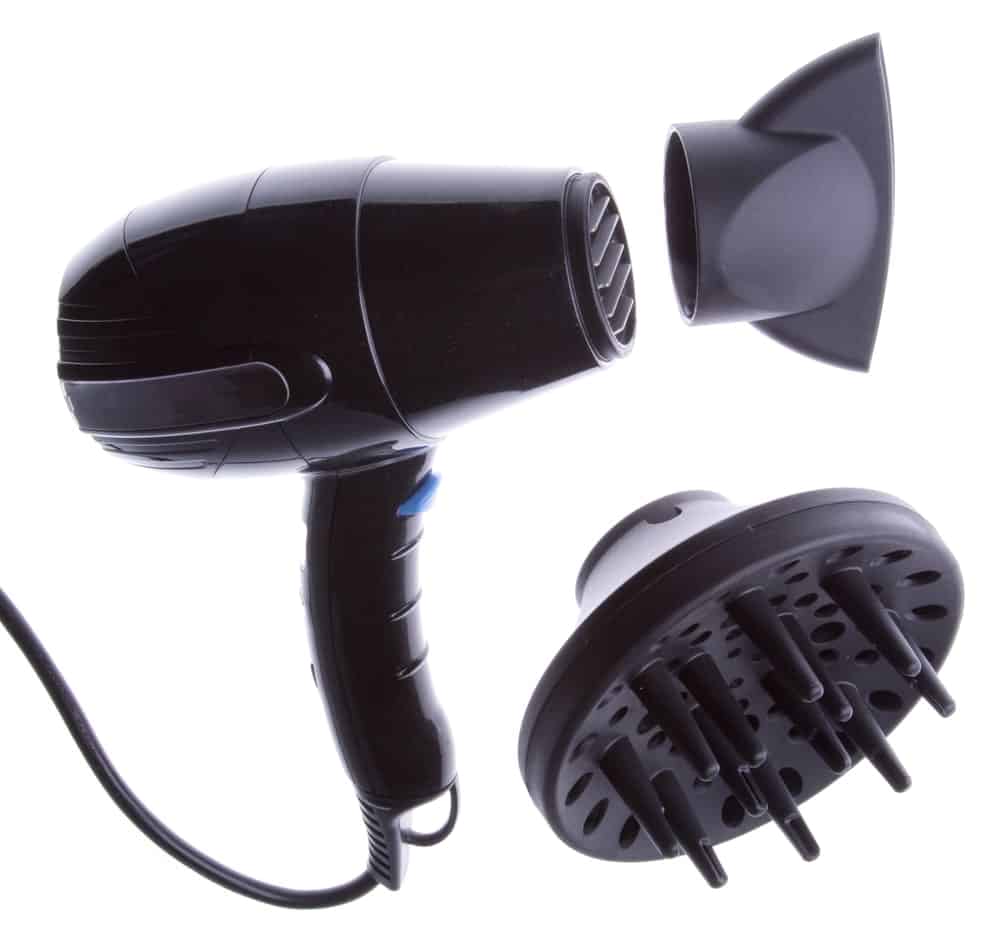 Certain brands and models of hair dryers have adjustable nozzles or ones that you can attach for different benefits. One, in particular, I love (as I have voluminous, curly hair) increases the diameter of the tip by about half, to roughly 10 inches (25.4 cm) across. It also has prongs on it that lift my hair and get the air more efficiently where it needs to go while preventing the streams from getting too hot. The result is bouncy, wavy curls that I adore.

Other applications for a hairdryer are:

When can you use heat guns and hair dryers interchangeably?

The low end of the heat gun’s temperature and the middle-to-upper end of the hairdryer are going to be roughly in the same area; 120 degrees. This means in certain circumstances you could use either for a task, though you need to keep that heat gun away from your hair in all circumstances. 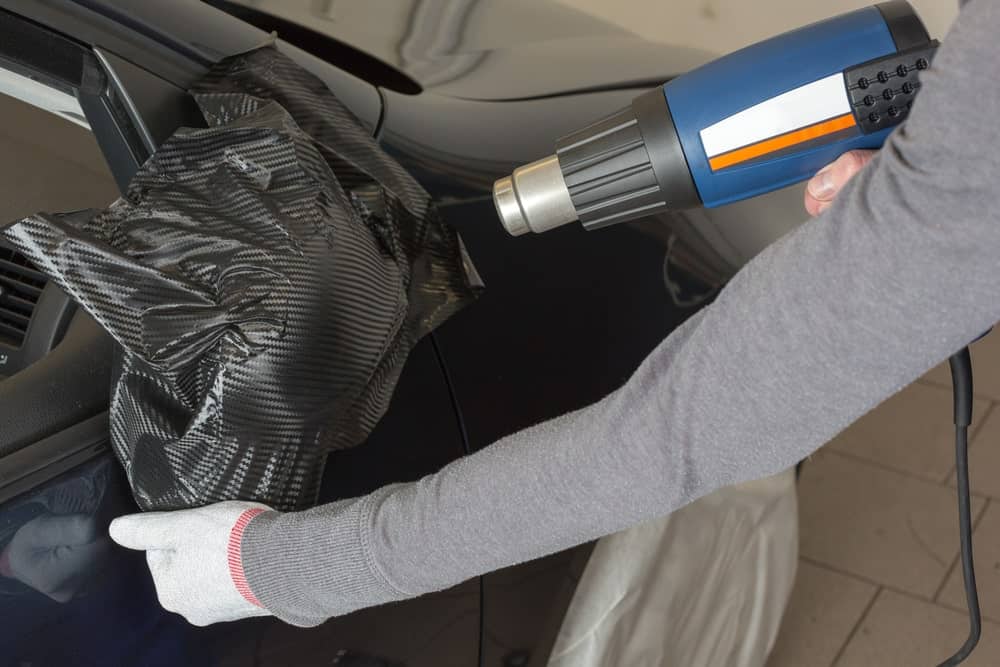 Remember when you’re using a hairdryer for non-hair related activities, however, that you don’t leave it running too long. It’s nice in a pinch, but they’re not made to run for long periods of time. If you’ve got a lot of hair and have spent time drying it after a shower, you might have experienced your motor shutting off.

That’s your hair dryer telling you that it’s time to take a break, and if you keep using it, it will end up in that big salon in the sky. Treat your robots nicely, and they’ll continue to serve you for years to come, is the point I’m making.